Published: Sep 12, 2018 · by: jenniferbanz · As an Amazon Associate I earn from qualifying purchases

This homemade crockpot spaghetti sauce is so easy to make and can be made with ground beef, sausage or turkey! I used my recipe from my grandma and made it slow cooker friendly.  I also give instructions for freezing and cooking on the stove top. 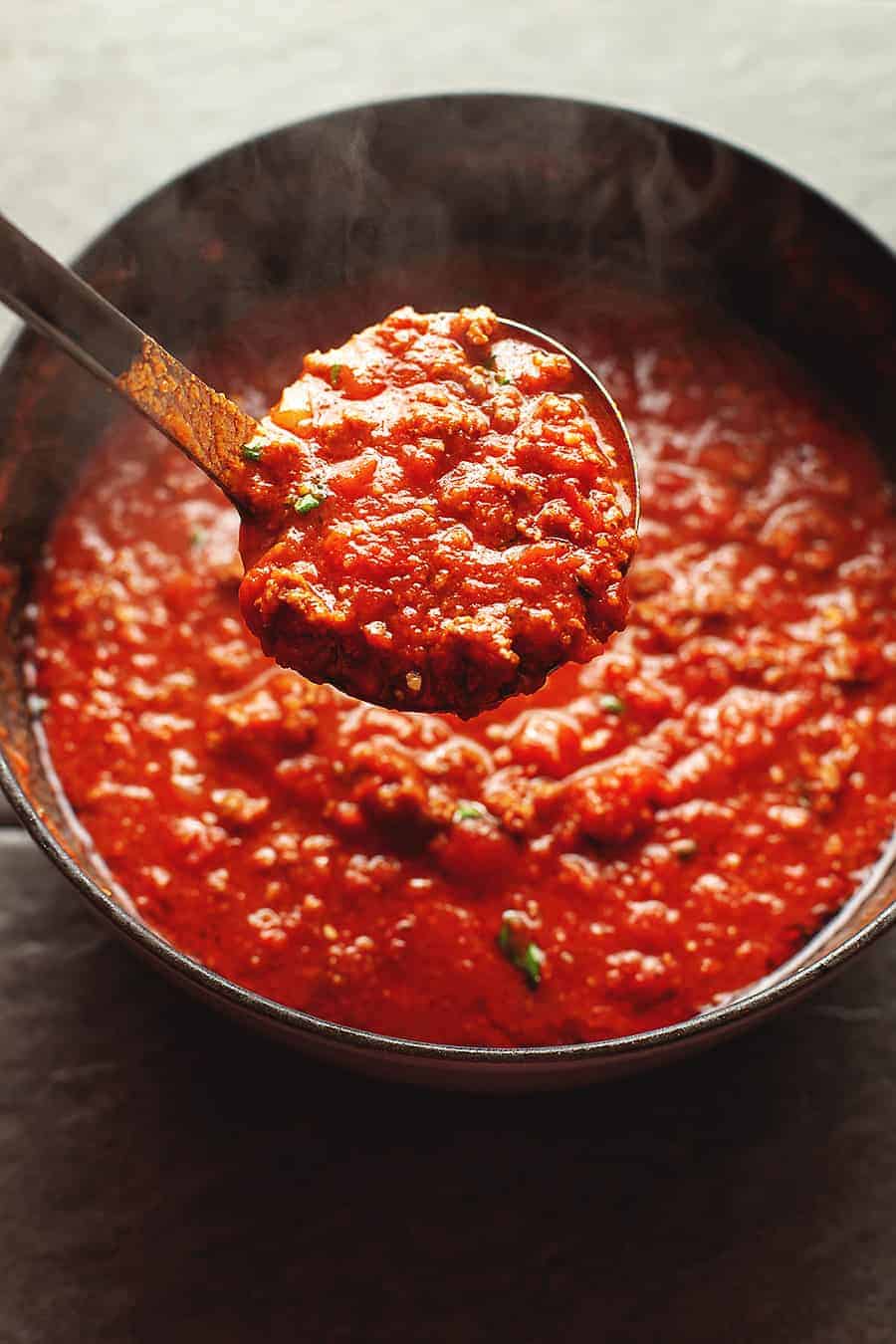 I love anything cooked in my Instant Pot or a crock pot slow cooker.  I love the appeal of having my families dinner made up in a snap or while I am working all day!  This Crockpot Spaghetti Sauce is my favorite slow cooker recipe because it has so much flavor.

I love the Rao's Marinara sauce that you can find in most grocery stores...but man is it expensive!  I love that it is delicious and it is the lowest in carbs I have ever seen.

I found the recipe for the Rao's Marinara on the NY Times website and I adapted it to make in the slow cooker!

Now I am not sure how the jarred Rao's sauce gets their carb count so low but I did my best on this one.

DO YOU HAVE TO BROWN THE MEAT BEFORE SLOW COOKING?

I say yes.  If you don't brown your ground beef (or ground turkey) before you add your sauce to the slow cooker, you will have beef that doesn't have as good of flavor, and you will have greasy spaghetti sauce.  Yuck! 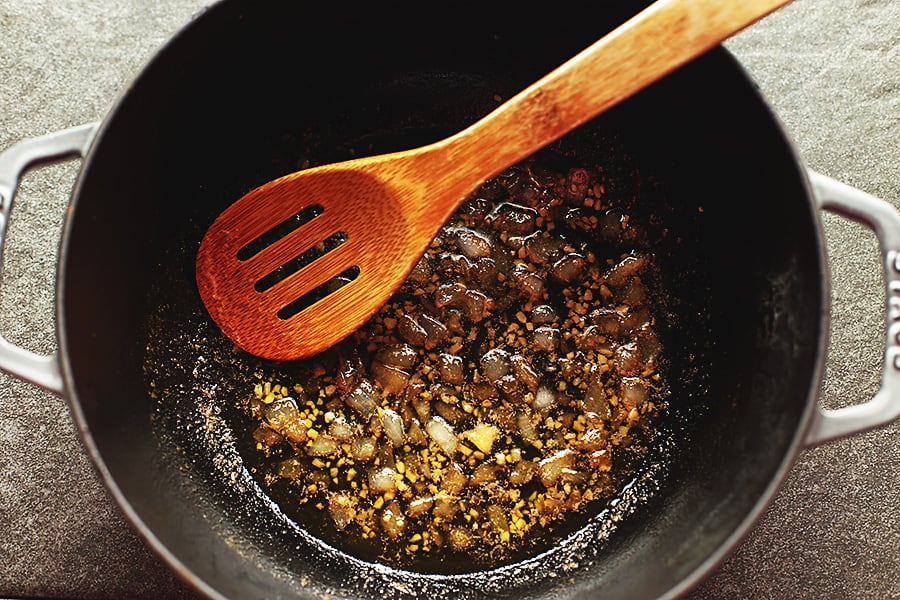 For this crockpot spaghetti sauce, I heat the olive oil in a heavy bottom pan and then I sauté the salt pork to render out the fat.  I had never heard of salt pork before this recipe, but I bought it anyway.  I cut what I needed from the package and then froze the rest.  Salt pork is very similar to bacon, just much more salty.

After I rendered all of the fat, I removed the salt pork from the pan and I added in the onions and the garlic and sautéed them until soft.  Then I poured all of that yummy stuff into the slow cooker, as well as the crushed tomatoes.

My next step was to brown the meat in the same heavy bottom pan until it is cooked all of the way through.  I then added that to the slow cooker as well. 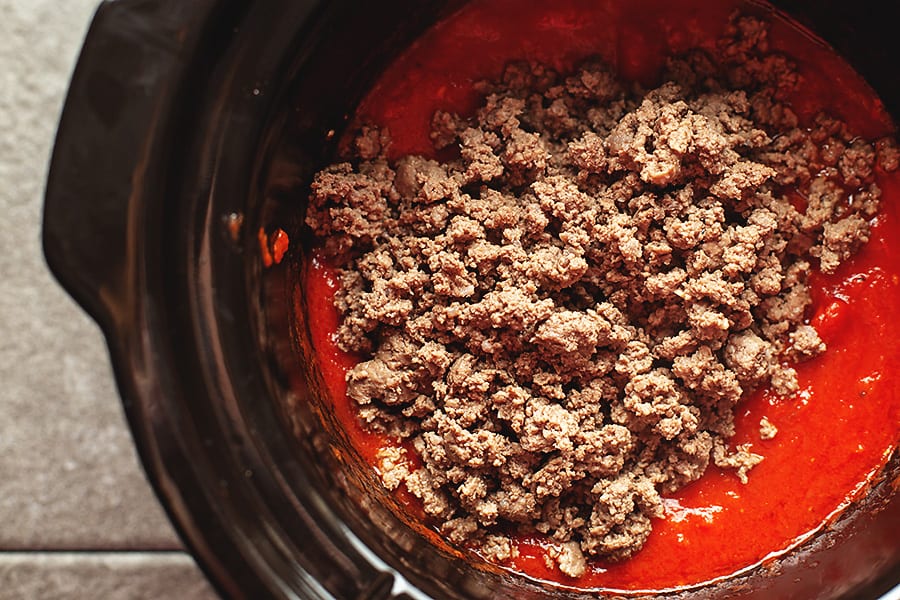 Now I just stirred everything together and set the crockpot on low for 8 hours.  The best spaghetti sauce is one that simmers all day, and the crockpot does just that!

Right before you are ready to serve the spaghetti sauce, taste for seasoning and add salt to taste.  I also added 6 torn basil leaves.

I love to serve my crockpot spaghetti sauce with zucchini noodles!

Some other Crockpot recipes on my blog are: 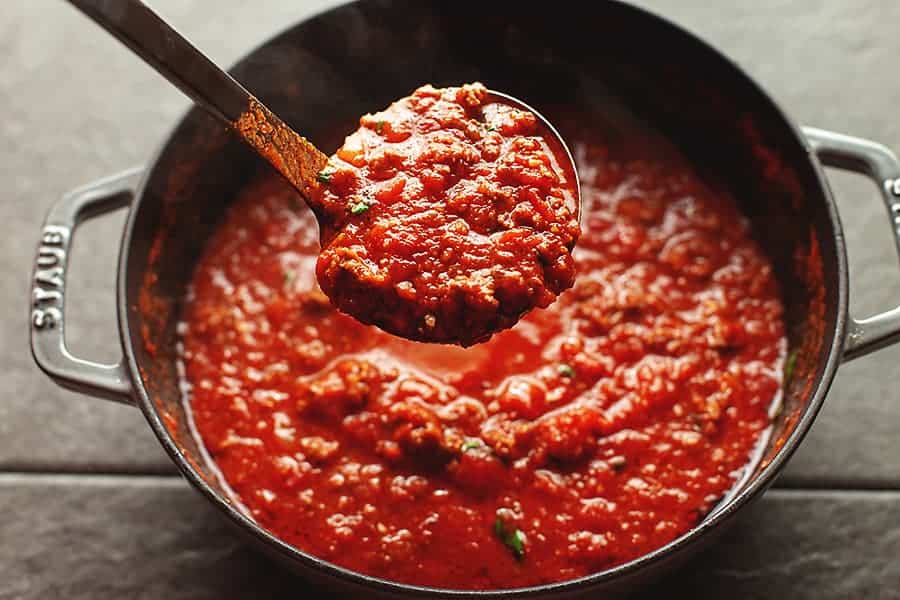 Related: I get all of my grass fed beef and pasture raised chicken from Butcher Box.  Read my honest review here. 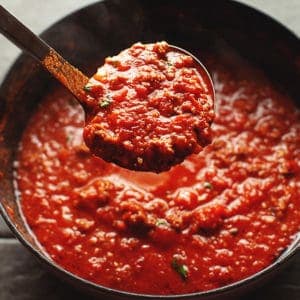 ⭐ Did you make this Crockpot Spaghetti Sauce Recipe?  Tag me on Instagram so I can see! @lowcarbwithjennifer