Published: Nov 16, 2017 · by: jenniferbanz · As an Amazon Associate I earn from qualifying purchases

This is basically a Thanksgiving dinner in a baking dish! You can serve it to family on Thanksgiving or you can eat it anytime you want as a low carb meal. 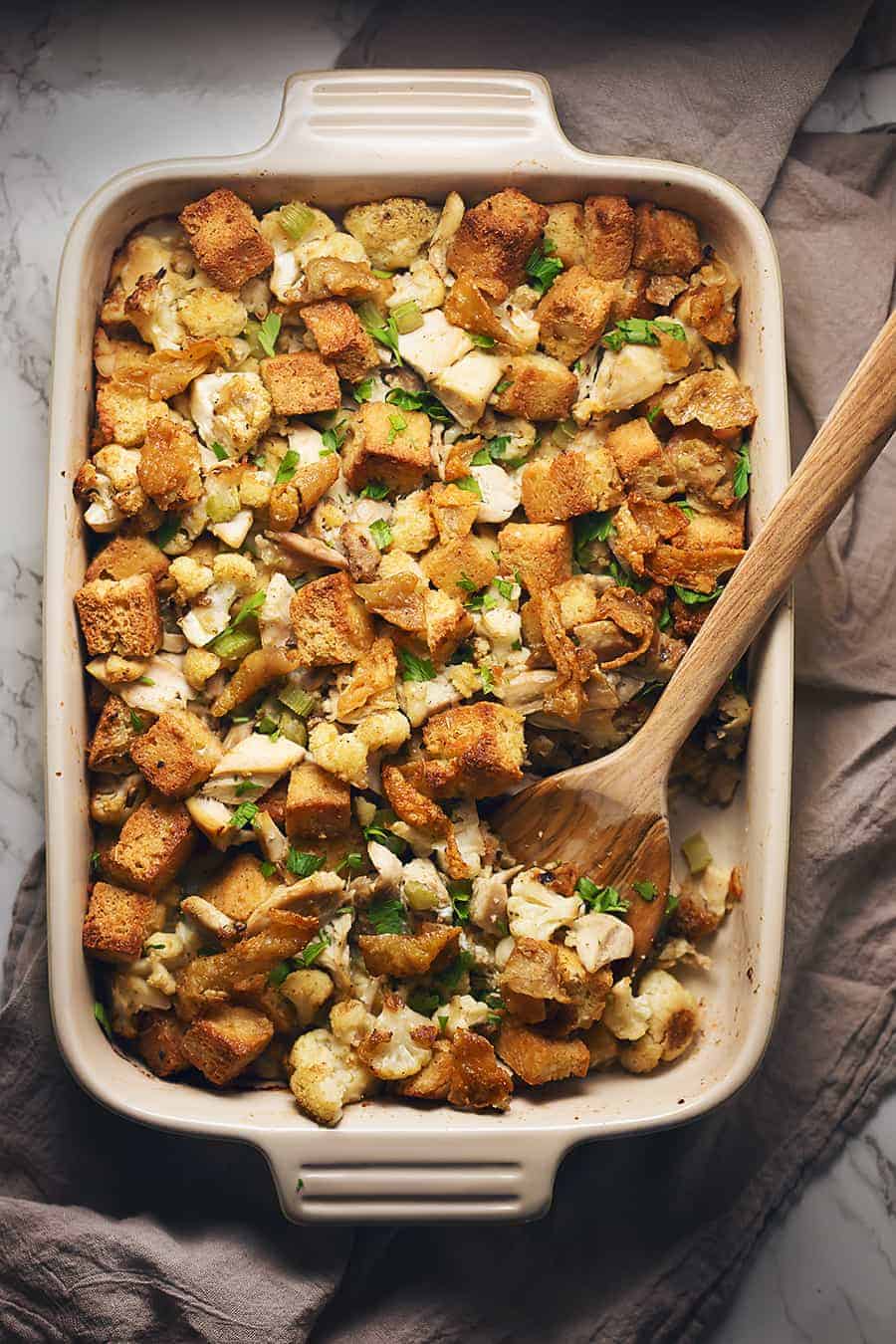 Related: I get all of my grass fed beef and pasture raised chicken from Butcher Box.  Read my honest review here.

I have always craved Thanksgiving stuffing.  But where I am from, it’s called dressing.  We don’t stuff our bird down here in the south.  The only dressing recipe I really love is my great grandmothers, now I can add this Cauliflower Stuffing with Chicken Thighs to that list!

I was in the thick of making this cauliflower stuffing and I was adamant about not putting any kind of bread in it.  But then I would just be left with mushy cauliflower with some seasonings and some chicken.  I needed more.

I hurriedly whipped up this low carb cornbread based off of my 90 Second Bread Recipe.  Let me tell you, this cornbread deserves a post of its own.  It is so good!  I added just a bit of dried rosemary to the batter and it gives the cornbread a wonderful savory flavor. 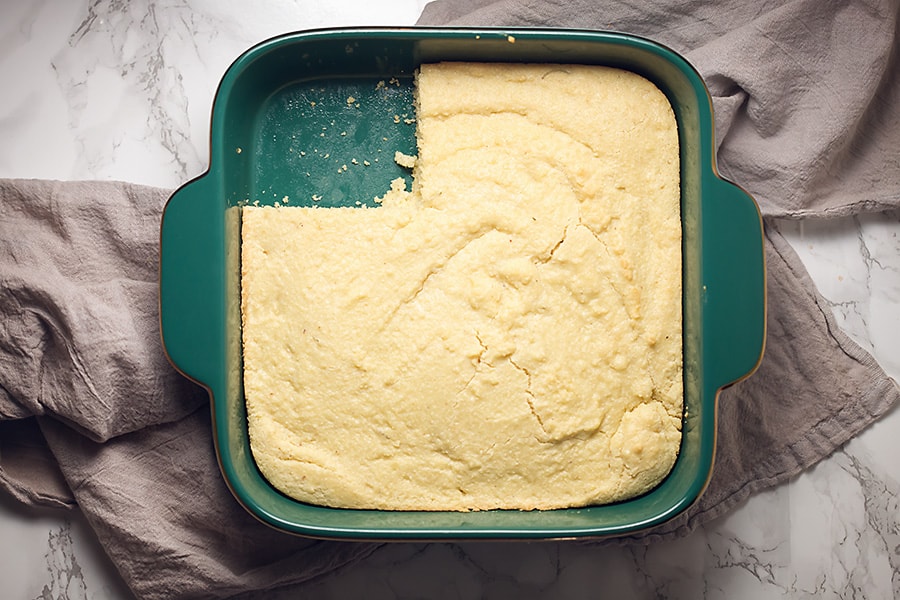 After the cornbread had cooled a bit, I diced it up into chunks.  I did mine into pretty big chunks, but you can make them smaller if you like.  I spread them out on a sheet pan and tossed them with melted butter.  Then I baked them in the oven until they were dried out and crunchy.  These would be amazing croutons! 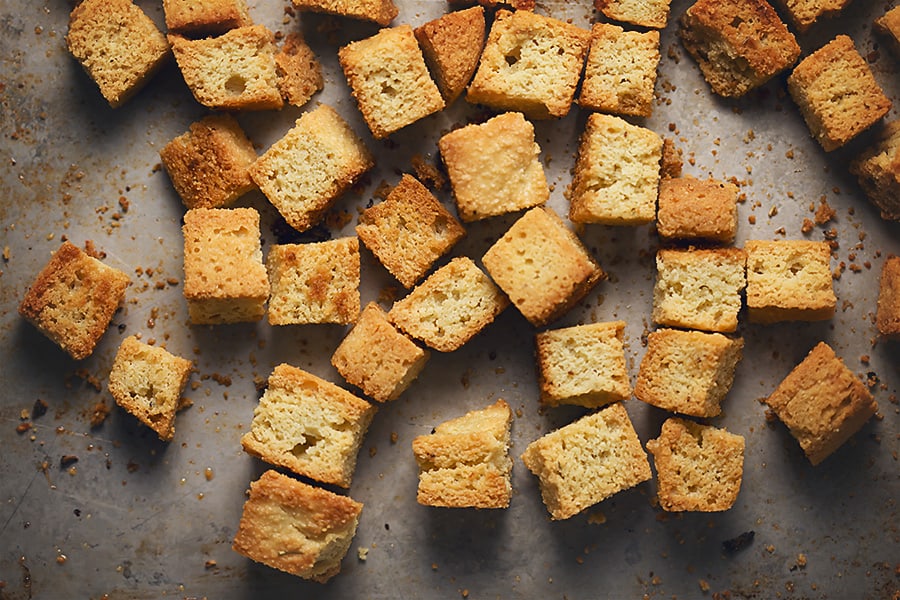 Like I said, I was in the thick of making this recipe.  I had already roasted my cauliflower and sautéed my celery and onions when I started making that cornbread.  This all made for a very long morning of waiting!  Don’t be like me!

So when you go to make this, I would do the bread first and get it dried out in the oven.  Then start working on the other stuff.

Which is roasting the cauliflower and the chicken!

If you want another reason to make chicken thighs, you should check out these other chicken thigh recipes.  My favorite is the Crispy Chicken Thighs! 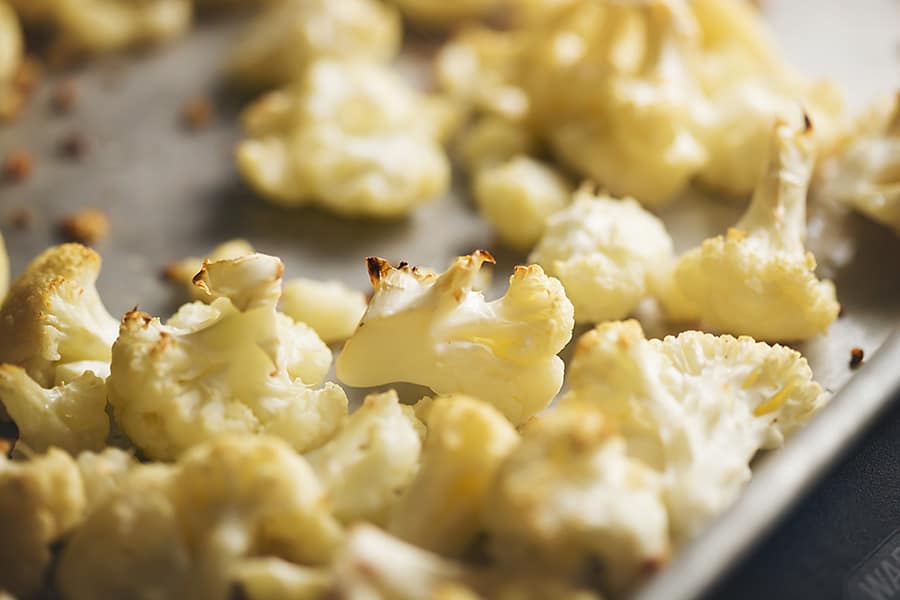 While that stuff was roasting, I sautéed my chopped onions and celery in oil and butter.  You just want to get them tender, not brown. 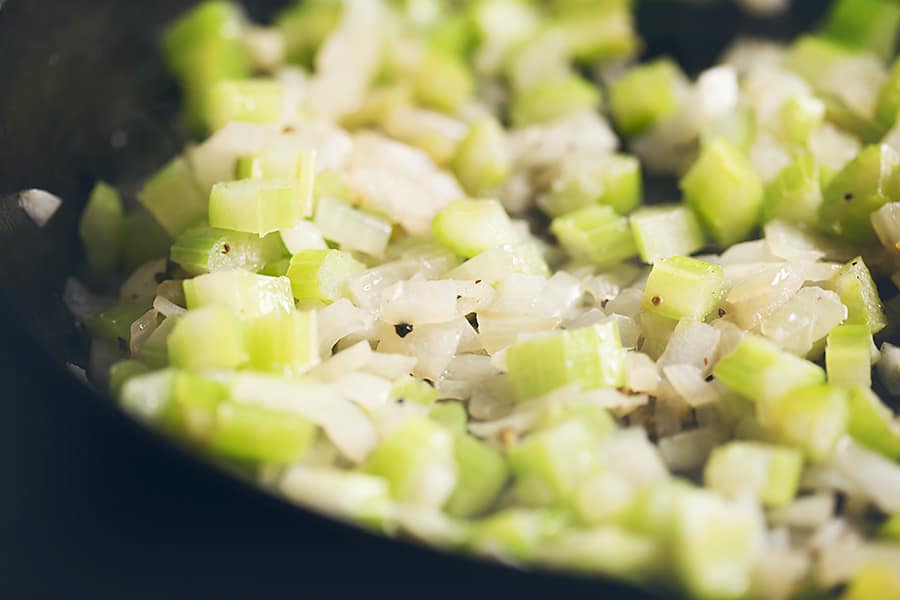 When all of the components were finished, I mixed them all up in a big bowl and then poured chicken broth mixed with egg all over the mixture and gently stirred.  I poured it into my baking dish, covered it with foil, and baked it.  Then I removed the foil and baked it until the top was golden brown. 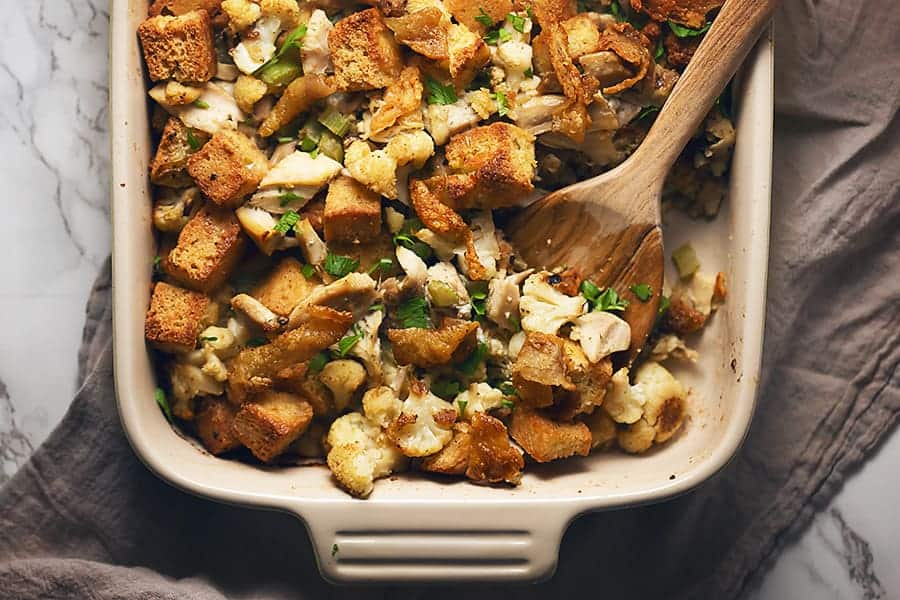 I did something naughty to this cauliflower stuffing…I cut my chicken skin into thin strips and sautéed them in a skillet until they were crispy.  Then I used them as garnish on my stuffing.  That is totally optional, but I would highly recommend it.  It was delicious!

Here’s a quick tip: make the bread ahead of time (like a few days before), and keep the toasted cubes in an air tight container.  You can also cook and shred your chicken a few days before and store it in the fridge. 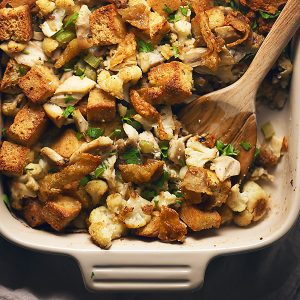 This is basically a Thanksgiving dinner in a baking dish! You can serve it to family on Thanksgiving or you can eat it anytime you want as a low carb meal.
5 from 1 vote
PRINT RECIPE PIN RECIPE
Course: dinner, Main Course
Cuisine: American
Keyword: gluten free, recipe for cauliflower stuffing with chicken
Prep Time: 10 minutes
Cook Time: 1 hour 10 minutes
Total Time: 1 hour 20 minutes
Servings: 8
Calories: 280kcal

⭐ Did you make this Cauliflower Stuffing recipe?  Tag me on Instagram so I can see! @lowcarbwithjennifer