Published: Nov 30, 2020 · by: jenniferbanz · As an Amazon Associate I earn from qualifying purchases

I love finding new and exciting ways to use my Air Fryer and this is my favorite trick yet. This air fryer bacon is finished in under 10 minutes (even with thick cut bacon), and no greasy mess all over the stove!  I give tricks for insuring there is no smoke while making bacon in the air fryer and tips on cleaning the air fryer when finished cooking the bacon!  This recipe is perfect for cooking a small amount of bacon.  If you want to feed a crowd, I recommend cooking your bacon in the oven. 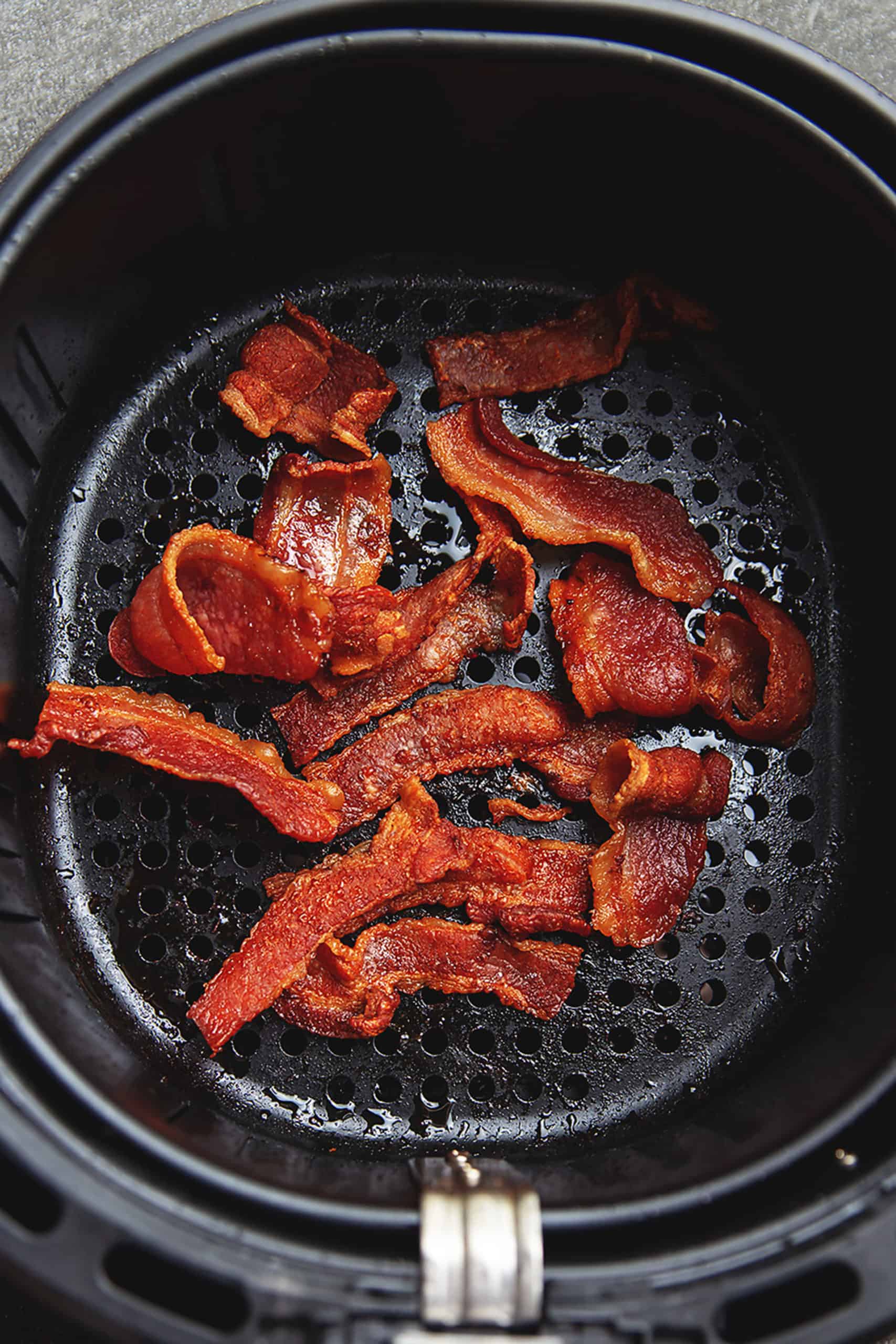 Like most people, I am a lover of bacon.  I have tried different ways to make bacon over the years and I think I have found this Air Fryer Bacon to be my favorite!

Also check out my bacon wrapped asparagus for another bacon treat in the air fryer.

Cooking bacon in the air fryer is such a cinch!  I have a 6 quart air fryer and I can cook up to 7 pieces of thick cut bacon at a time.

The trick for fitting more bacon in your air fryer is to cut the strips in half, widthwise.  This also helps the bacon cook quicker! 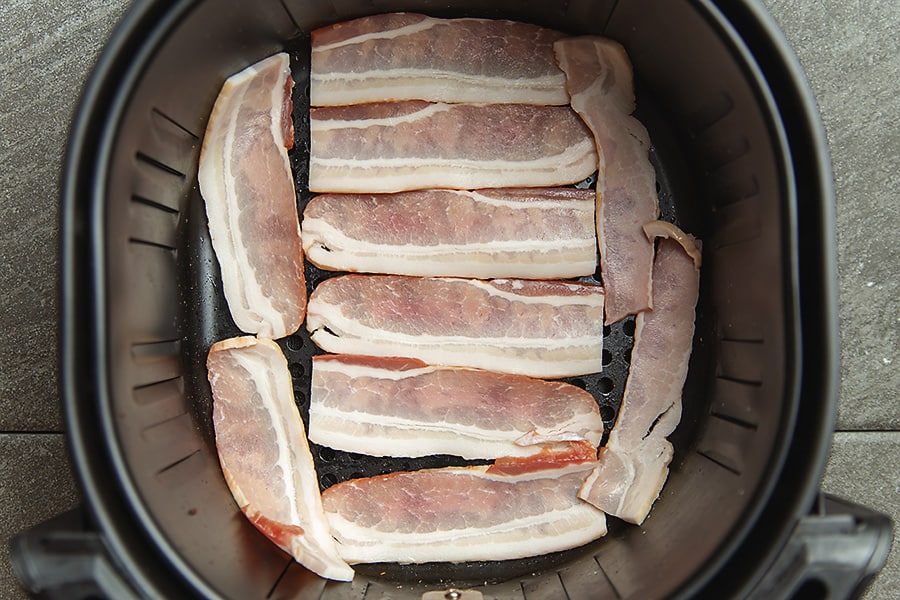 How long do you cook bacon in an air fryer?

For this Air Fryer bacon, I set the temperature to 350F, and the time to 9 minutes.  This is with thick cut bacon, so if your bacon is thinner, start with 5 minutes.  You can check on the bacon and add more time if you need to.

We cook the bacon in the air fryer at 350F because bacon has a smoke point of 374F.  This is the temperature at which bacon fat starts to oxidize and smoke.  This is how we avoid smoke while cooking bacon!

If you want to cook a second batch of bacon immediately after the first, you need to drain any grease from the basket and wipe it out so the fat doesn’t oxidize.

Is it safe to cook bacon in an air fryer?

It is important that you follow the directions of your particular air fryer.  I have a Nuwave Brio 6 quart air fryer and their instructions do not prohibit the cooking of greasy foods.

If you are cooking bacon in your air fryer and it starts to produce white smoke, that is the grease oxidizing.  This is probably because your air fryer is set on too high of a temperature, or it could mean you need to wipe out the inside of your air fryer (when it is cold) to remove any splattered grease from the burner.  350F is the perfect temperature to cook the bacon because bacon fat has a smoke point (the temperature at which the fat starts to smoke) of 374F.

Is cooking bacon in the air fryer healthier?

No, there is nothing different about cooking bacon in the air fryer than in the oven or in a skillet (if you drain your bacon on paper towels).  The air fryer is essentially a mini convection oven. What would make bacon “healthier” as in less calories, is to make it as crispy as possible which would render as much fat from the bacon as possible.  If you cook your bacon to where it is not very crispy, it will have more fat, which means more calories.

How to clean an air fryer after cooking bacon:

Cleaning the air fryer after cooking bacon is actually quite easy.

Before the bacon grease cools, you want to pour the grease out of the air fryer and discard, or save for later cooking!

Now, let the air fryer cool completely and wipe it out with damp paper towels, even the burner.  You never want any grease going down your drain so make sure you wipe it good!

Now you can wash the air fryer as you normally would.

Some other air fryer recipes that I have developed: 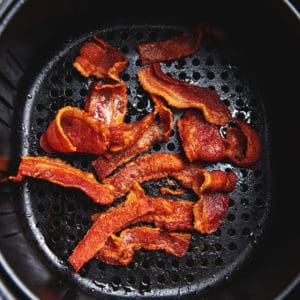 I love finding new and exciting ways to use my Air Fryer and this is my favorite trick yet. The bacon in the Air Fryer is finished in under 10 minutes (even with thick cut bacon), and no greasy mess all over the stove!
5 from 12 votes
PRINT RECIPE PIN RECIPE
Course: Breakfast
Cuisine: American
Keyword: gluten free, recipe for air fryer bacon
Prep Time: 1 minute
Cook Time: 9 minutes
Total Time: 10 minutes
Servings: 2
Calories:
Author: Jennifer Banz

« Keto Chaffles – 4 Flavors!
3 Reasons why we give into food urges »